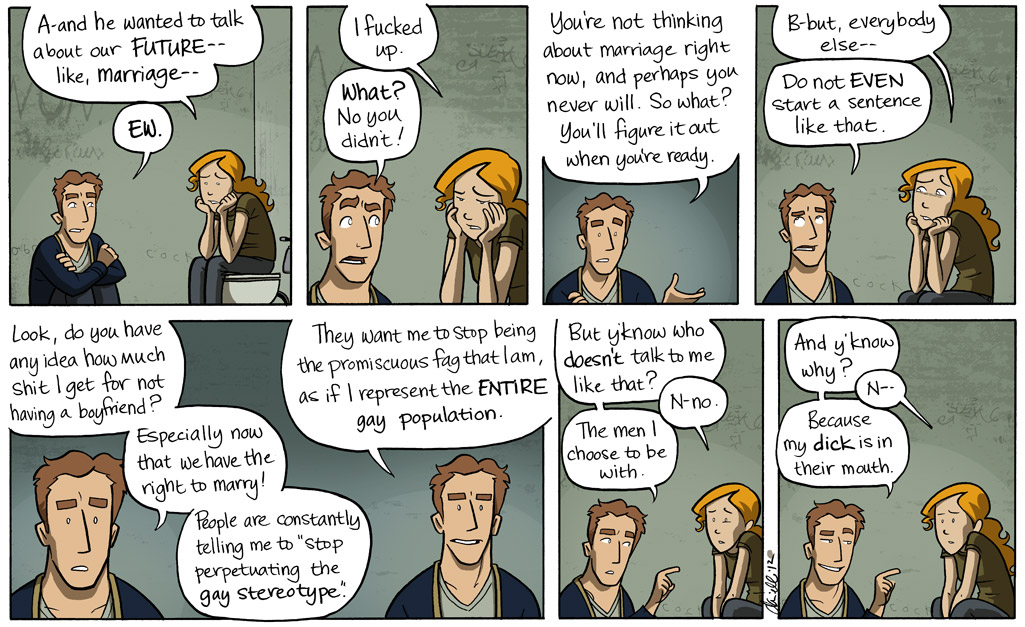 Perpetuating the Stereotype
Posted August 17, 2012 at 03:58 am
Huh, I've been doing a pretty consistent Friday double-feature for awhile now! I guess it's the best way to tell more GWS without trying to update twice a day. ;)

I've received a (small) handful of e-mails in the past year regarding Darren, and how stereotypical he is. Funny enough, I don't find him to be stereotypical, because most of my gay friends are pretty settled (or want to be). So I'm not really familiar with anyone like him.

Darren's snappy response to these e-mails has been in my head for awhile (although his speech was much longer and more eloquent in my mind), so I'm happy to finally let him retort.

I've actually received e-mails about several of the characters over the years, stating that they're being too stereotypical/too irresponsible/too unrealistic/bad role models. The thing is, they're not meant to be perfect, and they're not often meant to be role models.

I tried to write novels when I was in high school, but I never got past a single Chapter One. I would get bored too easily and give up. It took me years to realize that I was bored because my characters were perfect, and everything they did was perfect. It felt good to write about people and situations that were better (in my mind) than myself and my own, as a release, but the plots went nowhere and I couldn't get into the characters' heads.

I see this mistake often with amateur writers. And that's fine; I say, get it out of your system, let yourself take a brain-vacation and enjoy it! But when your book is finished, nobody's going to want to read it. Treat it like a diary, and write about something not-so-perfect when you're ready to share.

GWS is not only the longest job I've held, it's also the longest story I've told. After creating a few other comic strips about not-so-perfect characters, I quickly grew fond of writing about flaws and imperfect situations, particularly the ones that I could relate to. Although I created Hazel when I was in high school, I never allowed her to be flawed (if you haven't read them already, the college and high school strips, Hazelnuts, are featured in the back of GWS Volume One). Now she carries nearly all of my own flaws - and even a few more that she picked up along the way - and she's become one of my favorite characters to write.

Anyway, my point is: I like writing about people the way they really are, even exaggerated a bit. Most of the time, GWS is meant to be read as though we're seeing the plot unfold through different characters' eyes. New characters seem perfect to us because upon first meeting them, they're hiding their flaws behind their backs (something my friend Mike calls "sending your representative" - what you do on a first date). New romances seem perfect because neither significant other wants to recognize the flaws in their lover. Zach shouts "But I'm on my man-period!" because that's how he really feels, though perhaps he didn't actually say it out loud.

I feel like I've said this here before, and perhaps I'll end up repeating it once a year: I trust you to make your own judgments of these characters. You make judgments of the people around you every day. Your best friend does something wrong, and you don't abandon her; you just remind yourself never to do what she did, accept her flaws, and continue to love her.

Well, that was long and serious. Let's get back to dick jokes (thank you, Darren).
Comments