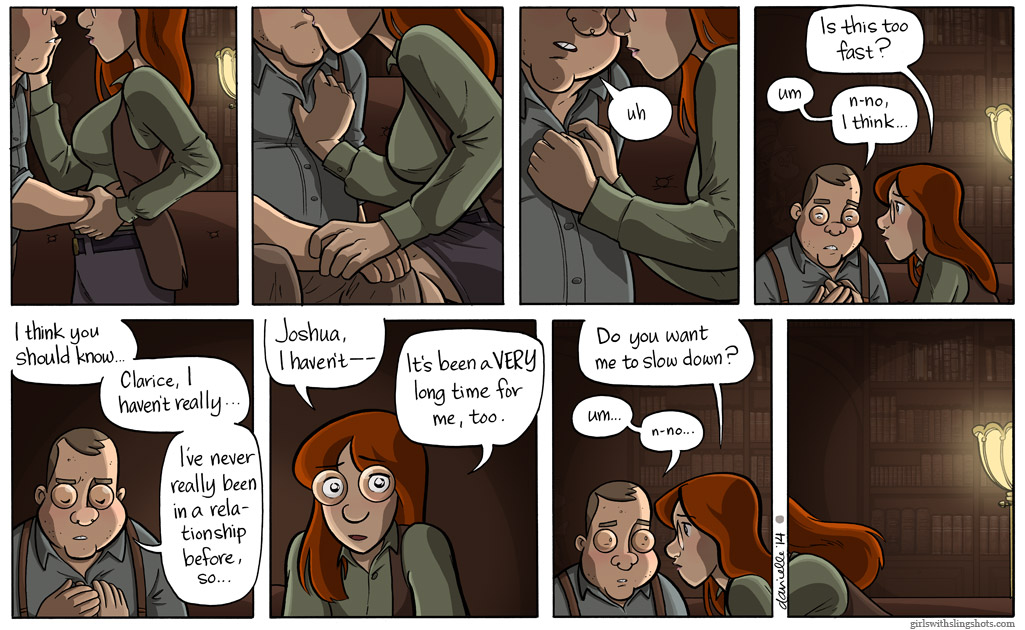 So much for a new blog post EVERY day. But hey, you got two rows today, so I maybe you'll overlook it. :)

There are two things you don't see in today's strip. Yet.

One: The incredible efforts of my colorist. LOOK AT THOSE WRINKLES. I shade fabric like a first grader with generic crayons that come in colors like "putty," liberally applying the Undo button. She shades fabric like it's a stick figure level of difficulty and it comes out looking like this.

*We'll be finally adding her - and a few other behind-the-scenes helpers - to the About page soon, btw; I just don't wanna call her out by name until I know what name she prefers to go by publicly!

Two: The background of the study, which I built earlier. There's a particular detail I added to suit Joshua's father's sense of humor (thanks to everyone who tweeted recommendations to me!), but it would've changed the entire tone of the strip, so I had to hide it. Because I think you would've had a very different reaction to the last panel had this bust been peeking behind Clarice's head in the final panel, as it originally was:

Personally, I prefer the Cat-In-The-Hat version. But we've been on a sweet little romantic high all week, so I figured I wouldn't spoil it for you. :)

Over The Mountain Studio Tour
a free, self-guided tour of artists' studios in the eastern panhandle of West Virginia
Saturday & Sunday
Nov. 13 & 14
10-5